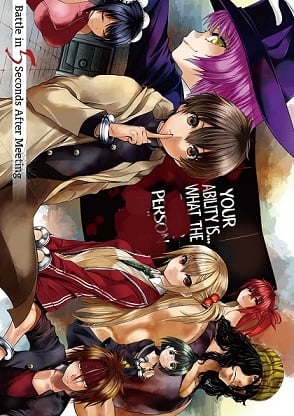 5 Seconds to Death, Battle in 5 seconds after Meeting

It was only a standard morning. Akira Shiroyanagi, a high schooler who cherishes diversions and Konpeito (Japanese desserts), has all of a sudden been hauled into a war zone by a baffling young lady who calls herself Mion. The members are informed that they are "eradicated from the family enlist, engaged with an analysis, and increased certain forces." Akira is resolved to win with his freshly discovered powers and devastate the association. Equipped with a power nobody expects and his "cerebrum" aptitudes, the new time of knowledge clash of starts!