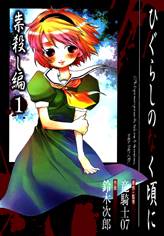 Summer 1983...Hinamizawa is a tranquil village, but its inhabitants have been plagued by strange deaths and unexplained disappearances seemingly every year. Some say it's the terrifying curse of Hinamizawa's legendary deity, Oyashiro-sama, causing victims to be spirited away by monsters, but is this town harboring dark, horrying secrets even more sinister than any supersition or myth? Tatarigoroshi-hen is longer than the previous two chapters, and it is considered to be the most depressing and confusing. Keiichi attempts to help out a friend with drastic measures, but as more and more people die, it's clear he is not the only one involved in this. This time, the spotlight shines on Satoko Hojo as being the "victim". Despite good (though misled) intentions, Keiichi Maebara is believed by some of the others to be a villain in this chapter. The story is divided into a total of eight chapters: four "Question" arcs and four "Answer" arcs. Each chapter keeps the same main characters, but ends in a different way. However, each chapter gives valuable answers, hints, and clues to the previous one, while at the same time bringing forth even more mysteries. The question arcs are: - Onikakushi-hen - Watanagashi-hen - Tatarigoroshi-hen - Himatsubushi-hen. The answer arcs are: - Meakashi-hen - Tsumihoroboshi-hen - Minagoroshi-hen - Matsuribayashi-hen. The side story arcs are: - Onisarashi-hen - Yoigoshi-hen - Utsutsukowashi-hen - Kokoroiyashi-hen.