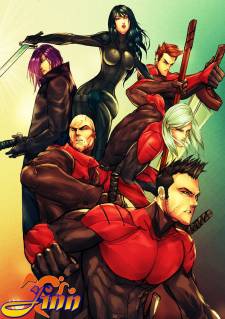 The series is about power and the choices made by people with power, it is told in a fun, exciting but yet intelligent way. The series is a collection of interwoven stories of the characters, their choices and decisions and their journey in this epic adventure. The manga doesn't have one particular main character, instead it has a group of main characters. These characters are people all around the world who realize that they have extraordinary abilities and the series follow their stories, some of these characters include a young black boy in london, a man in japan, a boy in chicago, a girl in the arctic, canada and russia and so on... It's called Jinn because in the fantasy world of the series, the humans get their powers by taking the powers of their individual Jinn. Jinns are spirits with free will living in our world but unseen to the naked eye, they were created before humans and have supernatural abilities. In this series each human is assigned an individual Jinn who's job is it to whisper bad thought them.