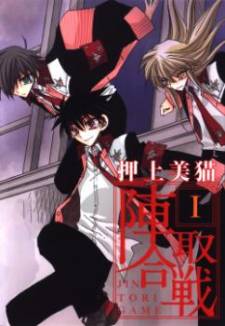 From Reverein Scanlations: We all know about school rivalry, but these two schools take it to a whole new level. From the back of volume one: The liberal traditions of Aoinomiya Gakuen and the disciplined traditions of Kaburaya Gakuen. Sharing the same territory, to this day these schools continue to violently compete with one another, and the fateful relations of the long-held Jintori Game unfold. If all three jin are stolen, the school itself will cease to exist. Then one day, Aoinomiya’s new Princess was abducted by Kaburaya. Akira who pokes his nose into everything, Kaiki who hates ghosts, and Shinobu who is actually a powerful son – the three of them set off to investigate— Jintori Gassen (Game) is Ohkami’s newest and currently ongoing series. Filled with a number of characters from both Aoinomiya and Kaburaya, there’s plenty of comedy, action, intrigue, and even some romance to be had.