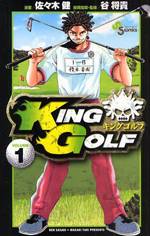 In Teirin High School, you are either part of a gang or an elite sports player. Sousuke Youki, called 'the predator,' is an undefeated master at fighting. One morning, as he finishes up a fight, Kazumi, a prodigy amateur golf player, took a look at Sousuke, ignored him, and walked right by. Infuriated, Sousuke sets out to get revenge on Kazumi for dissing him but Sousuke's revenge takes a detour as he gets himself involved in playing golf by the thuggish golf coach. Will this delinquent break legends and become "the King of Golf"? King Golf also won the 56th Shogakukan Manga Award in January 2011 in the boys category.