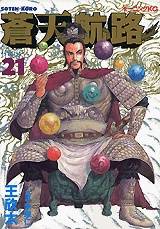 China 2A.D.: the corrupting Han Dynasty has thrown the entire country into chaos. Peasants revolt against the government. Into such an age, the ruthless and infamous hero, Cao Cao Mengde is born. Destroying old customs and values, he tries to unite China, with a band of promising and intellectual followers, handpicked for their individual talents and potential. Generally thought a villain, Cao Cao Mengde is portrayed as a hero in this story, which focuses on what kind of person he actually was. There are two other protagonists: Liu Bei Xuande and Sun Quan Zhongmou. Liu is a man of high morals and infinite potential. His servant, Zhuge Kongming is a mysterious man, who helps Liu to become a king who is loved by millions. Sun is the third descendant of the Sun family. A young and immature king also comes into the picture, creating more chaos. This is a Tale of the Three Kingdoms (Sanguozhi) in which these three men rage war throughout China.